9 Game of Thrones Filming Locations That Are Easy to Visit From Europe to Africa, Westeros to Essos, here are some of the best Game of Thrones filming locations to visit.

The iconic series Game of Thrones is finally coming to an end, but it will forever live on in the real world, as many stunning locations around the world were used for filming. And the greatest part is, most of these sights are easy to visit! Whether you’re team Stark, Lannister, or Targaryen (or maybe even Brotherhood Without Banners) there’s extraordinary filming locations for every GOT enthusiast to visit.

Dubrovnik provides the perfect setting for King’s Landing, the capital and largest city of Westeros. This medieval-walled city with orange-roofed buildings set against the sparkling Adriatic Sea is pretty close to how most of us envisioned this kingdom would look. King’s Landing was established by House Targaryen and is home to the Iron Throne—and many political showdowns between Baratheons, Starks, and Lannisters. As we know, Cersei Lannister currently sits on the throne, tyrannically ruling over all. Visit: Jewels of the Adriatic: Croatia and Slovenia Tour

Winterfell is home to the Starks, and although the filming location has since changed, Castle Ward House & Gardens in Strangford, Northern Ireland was where we first met the honorable, yet doomed family. Over the course of the first season, the fortress served as the setting for which we’re introduced to each Stark family member, learning of their fears, mysteries, skills, and desires. It’s also where we fell in love with their direwolves. If one could live anywhere in the Game of Thrones realm, it might be Dorne, the southernmost city in Westeros, ruled by House Martell. The area is filled with sunshine, Mediterranean elegance, and alluring characters. This city’s royal palace, The Water Gardens, is divinely executed with the use of Seville’s Royal Alcázar Palace and Gardens in Spain. Tyrion Lannister has been secretly escorted by Varys to Volantis from King’s Landing where Tyrion was wrongly convicted of murdering the evil King Joffrey. Upon their arrival, we get a brief, but beautiful look at the Long the Bridge of Volantis which is the Roman Bridge in Cordoba, Spain. The real bridge is not as long, and although CGI was used, it’s still pretty captivating nonetheless. Plus, it’s certainly an easy filming location to visit. In Astapor, a port city of Slaver’s Bay, Daenerys Targaryen, Mother of Dragons, is looking to gain an army. So, she tricks the city’s masters into giving her their Unsullied Army in exchange for one of her three young dragons. Once she is in control of the soldiers, the dragon burns the masters and remains with Daenerys.

With Astapor’s location along the coastline of Slaver’s Bay, scenes throughout this episode needed a real-life city with harbors, stellar ocean views, and stone-walled architecture—Essaouira fit the bill perfectly. As Daenerys gains confidence and a burning passion (literally speaking) to conquer Slaver’s Bay, she makes her way to Yunkai to set more slaves free. Here she is successful and wins over the now free people, earning the name “Mhysa” (mee-sah, meaning “mother” in the Old Ghiscari language) from them. The people of Yunkai lift her up in front of the city entrance, where you’ll see the noticeably beautiful stone architecture of Aït Benhaddou, a kasbah (“citadel” in Arabic) in Ouarzazate, Morocco. Kirkjufell is a mountain on the north coast of Iceland’s Snæfellsnes Peninsula. In the real world, it’s the most photographed mountain in Iceland, but in the show it makes only two rare appearances. The first sighting is when the Children of the Forest created the first White Walker in effort to fight the First Men who invaded their land. Then, we see it in a snowy blizzard, as a unique band of brothers, which included Jon Snow, Jorah Mormont, Tormund Giantsbane, and a few others, march north of the Wall to try and capture a White Walker to prove their existence. 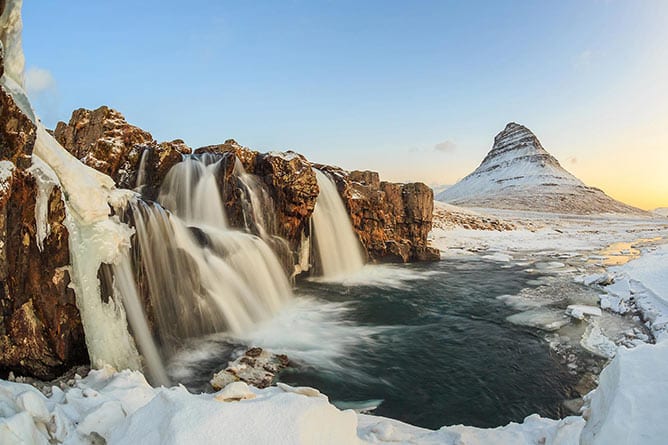 Eastwatch-by-the-sea is a castle and fisherman-esque port at the east end of The Wall. Throughout the show, viewers learn about Eastwatch-by-the-sea, but rarely see it. We finally get glimpses when Jon Snow and his team of men land their boats there to find members of the Brotherhood Without Banners and convince them to join the hunt to capture a White Walker. This was filmed at the Dyrhólaey peninsula, but can also be viewed at Reynisfjara Beach. The endless rocky cliffs of Þingvellir National Park make it hard for you to get your footing just right, which helps create a tricky and suspenseful fight between The Hound and Brienne of Tarth. The Hound has taken Arya Stark in attempt to gain a reward by bringing her back to the only family she’s presumed to have left. He also secretly respects her and hopes to bring her somewhere safe. But, when they cross paths with Brienne, who swore an oath to Catelyn Stark to protect her daughter Arya, a grueling fight ensues. As we say goodbye to this show (or rather “see you later” because who isn’t going to rewatch for the rest of their life?), you should start making your plans to visit these awesome destinations. Luckily, smarTours is here to help you get there with ease.

Which filming location will you travel to first?

Since 1996, over 200,000 travelers have trusted smarTours to take them on adventures around the globe. With a mission to make once-in-lifetime trips accessible to all customers, you won’t have to wait or compromise when booking with us. We feature tours across all seven continents and every trip includes airfare, taxes, a curated itinerary, English-fluent guide, many meals, and 4-star+ accommodations.